EcoMondo 2022 – Commit to the Mission Charter to contribute to a healthy “pollution free” MED | Rimini, Nov. 9, 2022
Hybrid workshop “Working together towards a Mediterranean lighthouse for the Mission Restore our Ocean and Waters” | Barcelona, March 1st 2022
EcoMondo 2021 – Connecting the system of Ports and Harbours to unlock the potential in preventing and reducing the effects of Marine Litter across the Mediterranean Sea| Rimini, October 27, 2021
EcoMondo 2021 – The BlueMed Pilot healthy plastics-free Mediterranean Sea towards the 2030 targets: the strategy developed by the plastic producing and transforming operators of the area | Rimini, October 26, 2021
Unlocking the potential of Ports and Harbours in preventing and reducing the effects of Marine Litter – BlueMed Pilot workshop | Venice, September 14, 2021

What is BlueMed about?

The BLUEMED Initiative aims to advance a shared vision for a more healthy, productive, resilient, better known and valued Mediterranean Sea, promoting the citizens’ social well-being and prosperity, now and for future generations, and boosting economic growth and jobs. 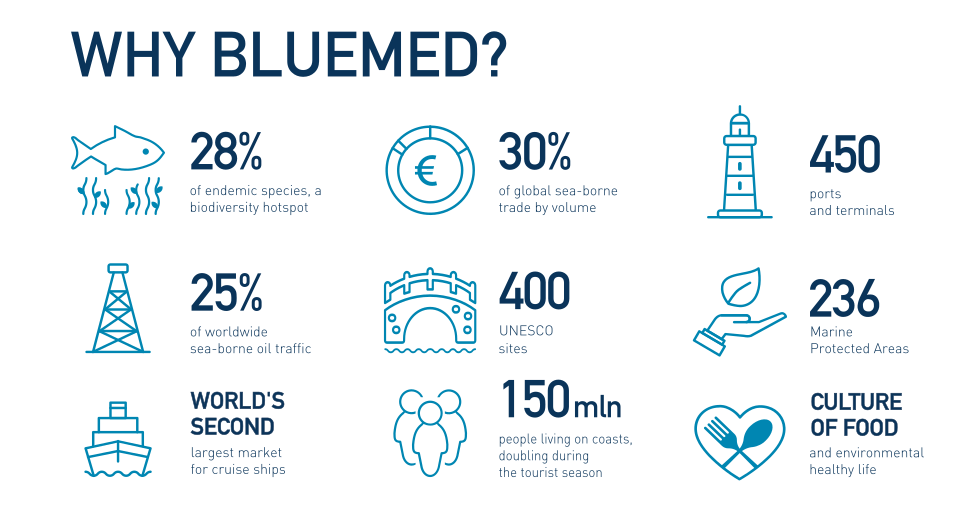 Among the seas surrounding Europe, the Mediterranean has no match when it comes to biodiversity and the links between human activities and the environment. It is changing fast in response to both natural and anthropogenic pressures. Climate change, growing maritime traffic and pollution, overexploitation of fish stocks and invasions of alien species are among the stressors placing the region at risk. At the same time, the Mediterranean’s unique features provide major local opportunities for blue growth and jobs, ranging from fisheries to tourism.

The region’s geopolitical complexity may represent a constraint on the development of blue economic growth: joint efforts are required to address common challenges. A global perspective, transnational and international cooperation, are essential to realize safe, secure and sustainable development for all by taking into account national priorities. The BLUEMED Initiative was jointly developed and agreed between Cyprus, Croatia, France, Greece, Italy, Malta, Portugal, Slovenia, and Spain and facilitated with the support of the European Commission in 2014.

BlueMed has hence the opportunity to act on both sides of the Mediterranean and of promoting Euro-Mediterranean collaboration, fostering Blue Growth-related research and innovation activities. 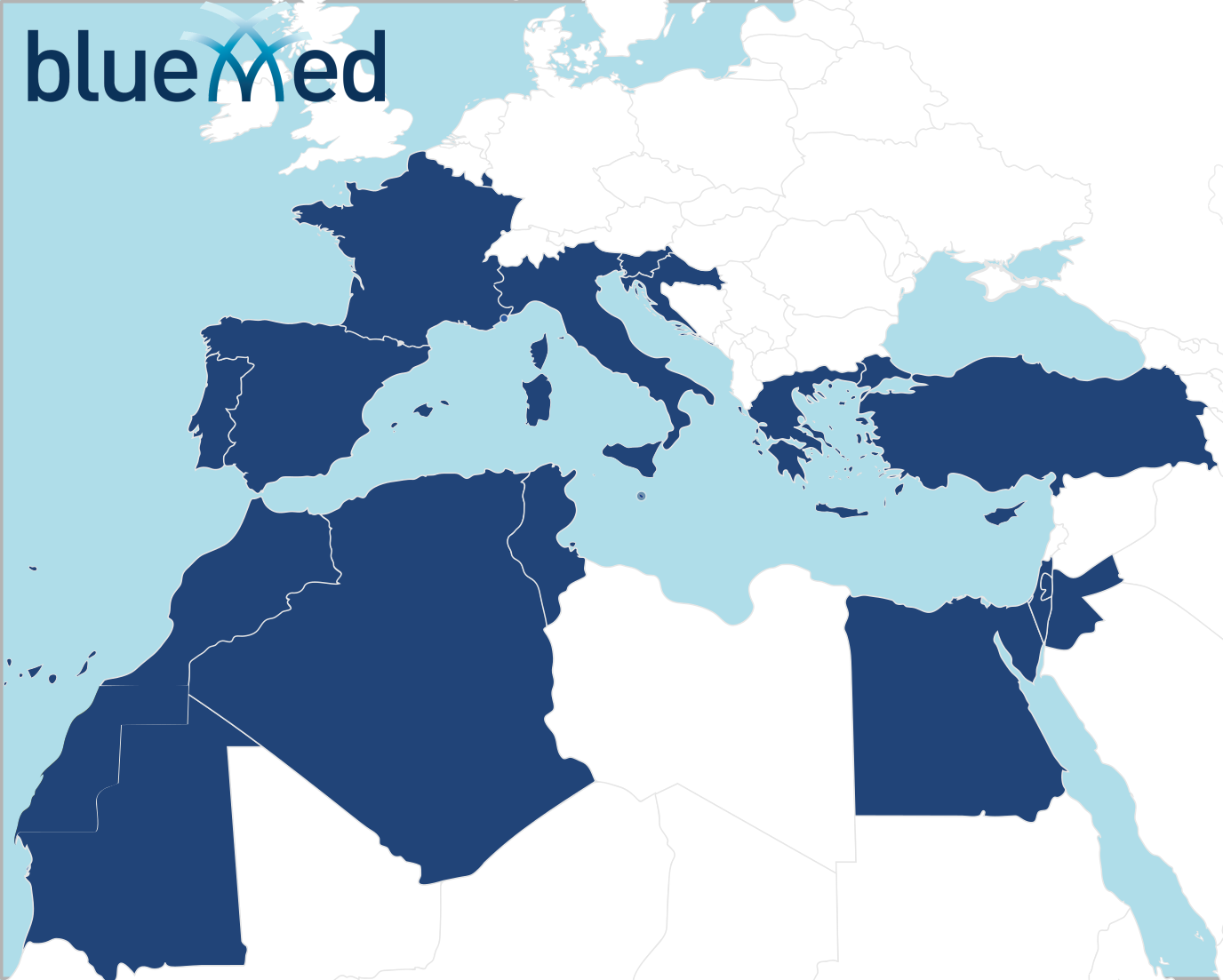 The countries participating to BlueMed

How did we get here? BlueMed timeline

How Does BlueMed work?

The BlueMed Initiative, set up in May 2014 in the framework of the European Strategy on Blue Growth, is a political initiative aiming at advancing a shared vision for a more healthy, productive, resilient, better known and valued Mediterranean Sea, promoting the citizens’ social well-being and prosperity, now and for future generations, and boosting economic growth and jobs.

The BlueMed approach is especially grounded on promoting the development and coordination of interdisciplinary reasearch on marine and maritime issues affecting blue economy.

In November 2015, the Union for the Mediterranean endorsed the BlueMed agenda with the Declaration on the Blue Economy, inviting non-EU countries to join the BlueMed Initiative.

An important milestone was then reached in April 2017, when all the UfM and EU member states endorsed the Valletta Declaration on strengthening Euro-Mediterranean cooperation through Research and Innovation.

The BlueMed Coordination and Support Action (CSA) was funded in October 2016 by the European Commission as the “operating arm” in support of the BlueMed Initiative.
It organizes the work of the thematic platforms, promotes coordination among blue economy actors and among the Mediterranean countries, and deals with all the practical details of the Inititiative’s activity, as well as contributes to shape the Initiative’s future developments.

As an operative tool, the project set up the BlueMed platforms on “Knowledge”, “Economy”, “Technology”, and “Policy”, four transversal thematic fora where country representatives, the National Pivots, meet and interact. Established to ensure broad consultation and constant dialogue at Mediterranean and national level, the platforms enhance virtuous relationships among different stakeholders to consolidate the SRIA towards the definition of the Implementation Plan.